Ok kinda scatterbrained right now so, let’s just get back into the blogging spirit with a short list of accomplishments:

Had to rethink some mechanics.. but the controls feel SO much better now.

The actual performance of the dive and flap buttons are undergoing constant tweaking, but the sense of control is coming along superbly.

Screen scaling is working.. but the size isn’t right on smaller screens.  I need to re-write the system to always maintain a specific horizontal distance and let it just create blue sky on top of the world for the extra space.   BUT IT WORKS..

I’ve been using Symphonical as my SCRUM list and I’m in love!  It’s just super easy to use.

Collisions are in (if a little buggy) ,  Basic Box for the dragon and per terrain tile polygons.

The dragon is now a fully animated Spine character  (16 different parts all animated) and is just a wonderful workflow.. Export from photoshop and it’s instantly in Spine, then a quick export directly into the JSON objects with an atlas and then a refresh. and the changes are live in-game.. 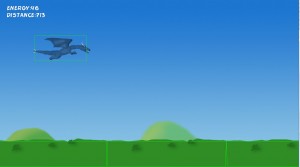 A little more work on the dragon animation

Then some UI work.